Ainsley Luke Smith was taken from us on 3rd May 2008. on his way to work in a RTA  At just 17 years old he was training to be a chef .Following the death of his father in July 2005,he had faced his demons which at such a tender age is pretty hard, and was about to embark on what promised to be a fantastic career he wanted to make something of his life. That is the official blurb that everyone gets to read, but I asked Ainsley's mum if I could share this poem because , I can't even start to put into words what this family had gone through. Something held Barbara ,together support and love, inner strength and a knowledge of this is not it. This cannot be it, this lady is amazing for her courage and an inspiration to others who have lost someone dear to them..... Ainsley's death woke me up and made me realise I couldn't carry on like I was because Ainsley was a young man on the brink of life, I was facing an abyss. My children needed me and I mourned that young man as he had grown up with my children, and been a regular visitor to play when young. Now ih grief I found strength and I can never thank him enough because it is he that helped me break free, I felt I owed a life cut short to at least be able to let my children live theirs and me mine.. ..... x

This physical life we have on earth is only on loan to us maybe we will have many years or only the briefest of time, and it is up to us to make the most of what we have.  Barbara has lost her son Ainsley in a tragic accident he was only 17, this is less than three years after Phil her husband died from cancer.  This has shaken the community to its roots.

Why them? Why Ainsley? was the question we all asked

Well when the tears stop you will begin to realise that this young man that seemed to have his whole future ahead, had achieved in those few short years what many of us struggle an eternity to find,

He had come to terms with the death of his father,
Kicked out at the world for a short while, I think secretly he enjoyed the kicking out bit
Then grabbed life in both hands and lived,
He found the career and job that made him happy,
He loved his family with a passion
Mainly he just wanted to make his mother proud,
He had a wonderful girlfriend on his arm

He was living the dream.

Till we meet again in memory of Ainsley Luke Smith 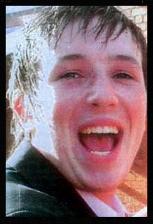