How does Domestic Violence affect me?

I have struggled with my past as it has held tightly to me, sometimes feeling like I am being suffocated. A past that involves any form of violence has negative icy fingers that spring up and poke you many years after the events have passed. Mine has never let go due to my disability, I received an injury to my back and head that has become worse over time, although now I can feel the warmth of the sun again.  I started working on a simple website in May 2009 confident that I could link my blog, poetry and twitter and just share some of my work, Oh confidence is a fickle friend, it picked me up and threw me down or that's how I felt , till now . I became poorly less than a month after starting my new project, it lay forgotten in cyber-space until 2014. I was a different person no longer fully mobile, my words having returned,slowly .I found myself clearing out paperwork and there on a scrap of paper was a password and web site address, memories started to turn and it gave me something to focus on to finish what I started. This will not be perfection, it will probably be littered with mistakes like my life, but it's all about learning, please join me on my journey as I find my feet and hopefully you might enjoy reading, or listening to my words as much as I like writing them . 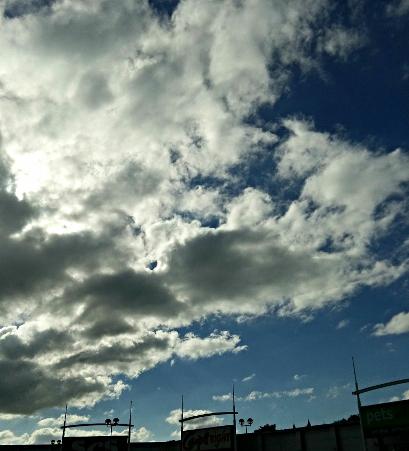 THE CLOUDS WILL CLEAR

The clouds will clear I have promised myself so,

I don't know how long, they will take to go.

This prison I'm in, created by disability and fear,

Stops me going far, or people getting near.

I  look to the skies in my photos all the time,

Because it won't be to long before I see a sign.

I will be walking on sunshine, that's my tagline.

Wind beneath my wings, a song that is mine.

Grey clouds can do one, your on a deadline .

Long ago in another life, a busy mother, a loving wife. Stop right there delusion, deluded, barmy, crackers, yes I was all that, there was something missing in the equation a loving husband (enter stage right) Oops he missed his cue, from the left enters a Narcissistic MAN. Oh for as long as it took for the MAN to get his feet under the table to secure his place, he was a knight in tin foil armour  and yes I was at fault for not seeing the signs, for not reading the warning label.

But the first slap took me by surprise, then I convinced myself he wouldn't do it again. He wouldn't keep criticizing me for what I wore, my make up, my hair, my lack of make up, my face, my voice, for breathing. Still I stayed, I became a doormat at home , behind closed doors.

So many times I asked him to leave, it was my home, mine and my childrens, I had 4 previously and I am no angel at all I openly will say my life is a train wreck. I have been married three times this MAN being the third. I can pick over my life story with a magnifying glass, which I am doing in my book, slowly and painfully. but this was the biggest derailed carriage of all 10yrs of heartache, torture and pain. Two good things came from this time with him children 5 and 6.

He has done so many awful things and I have felt there was mo where to turn, no one to listen to me. He had no respect for me his family or authority. I had called the police on many occasions and he was just so rude and disrespectful , I couldn't believe the officers just left him sat there sneering at me. He thought he could control everyone.

So the long fuse was lit and it smouldered away, I never realised how many people witnessed his outbursts till after, Or how many women he had chased, yet he spent our married life accusing me of affairs and taking his guilt out on me.

His violence reached a peak and that is why I am now the not so proud user of a wheelchair, why I am disabled, why a size 12 steel capped boot (with full leg power behind it) used with force in the lower spine and back of the skull and lower skull and neck against a body on the floor is not a good combination. After the boot to the back of the neck I don't remember a lot, my kids crying and voices, but mostly a distinct lack of pain. It wasn't till many years later I found the true horror that had taken place that day, I can only say someone was watching over me shielding as much as possible because I was fractions away from being killed in that moment .

The most disgusting and degrading and downright unforgivable part is I heard my children's cries. I heard the fear in the screams, had I bought us this low? Had I hurt my children mentally?

For easy reading and to be concise

Yes police were called and the MAN was arrested, it took a LITTLE BIT OF EFFORT, try 6 officers to get him into the back of the police van, charged and bailed not to come within a certain distance of the house or approach me or the children. Wow there lay my next nightmare.

The night of  'The flash of steel' (I shall continue)